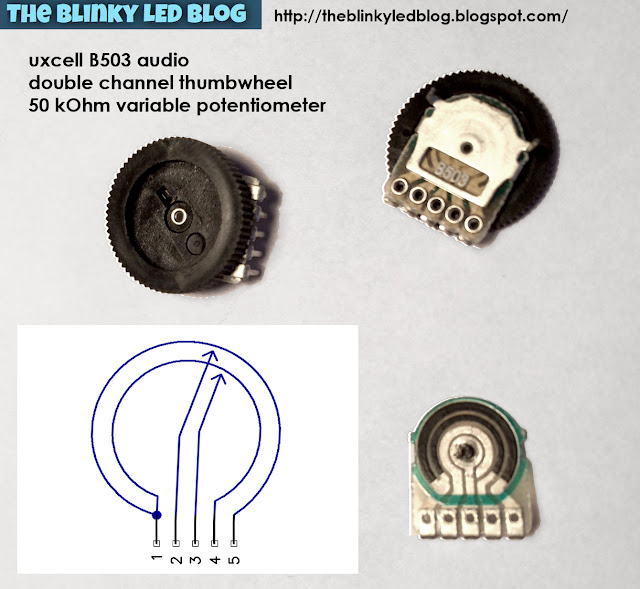 Didn't find the pinout of this "Ebay-component" anywhere, so I ripped one apart and here are it's internals for the benefit of the internet.
Posted by jonnection at 18:49 1 comment:

Email ThisBlogThis!Share to TwitterShare to FacebookShare to Pinterest
Labels: b501, b503, pinout, potentiometer, thumbwheel, uxcell

Problems with Cortex-M0 SysTick_Handler interrupt function ? Did you extern "C" it ?

SysTick is a system ticker on the ARM Cortex-M3 and -M0.

It is an extremely handy timer that counts down from a set 24-bit value. When it reaches 0, an interrupt can be set to do something, for example increment a counter.

In my case, I wanted a counter that would count roughly 1 millisecond at a time.

SysTick->LOAD is the value that Systick counts down from. So for a clock speed of 48 MHz, a countdown from 48000 will give you 1000 interrupts per second. The -1 is needed, but I can't remember what was the reason for it.

Here is the interrupt handler function:

However, the interrupt was not firing, and the counter was not growing !

I was like what ?!!?? I could see by hardware debugging that SysTick->VAL was decreasing, so SysTick was running.

The reason was very simple. SysTick_Handler is declared in startup_LPC11U68.cpp as follows:

In addition, there is a implementation of an empty SysTick_Handler in the same file:

Now, in a .cpp file, the name of your SysTick_Handler WILL BE MANGLED !

Therefore you MUST use extern "C" if your handler is within a .cpp file !

Posted by jonnection at 01:37 No comments:

Importing mbed libraries to Em::Blocks - do not get caught by RTTI and "undefined reference to typeinfo" !

Ok, so you got some project that you have taken from mbed online compiler and imported to Em::Blocks. It's compiling fine.

And then you decide, oh yeah I need another library from mbed, so I'll just download it and add the files into my project in Em::Blocks.

If you have any virtual functions i.e. polymorphic C++ classes, you will run into this:


Namely, you will run into "undefined reference to typeinfo' error given by the linker.

And you will be scratching your head.

And you will be reading up on your knowledge of polymorhism. Speaking of which, this is the most through and informative description I have ever seen: http://www.drbio.cornell.edu/pl47/programming/TICPP-2nd-ed-Vol-one-html/Chapter15.html

Ok back to the story.

And you will be wondering what on earth is going wrong. Some inherited classes with virtual functions work, while others do not. What on earth could it be ? Malformed destructors ? Missing definitions ? Missing RTTI ?

... can't be RTTI. RTTI was deprecated in mbed a long time ago.

... can't be RTTI. I am already building mbed libs from source, not the ready-built binaries.

(Sorry for outburst, took me a _while_ to find this problem)

Why ? Because imported files get different settings than files that were within the original .eix exported from mbed.

When importing an .EIX file every c++ file is given it’s own properties section in the .ebp file, where as the regular c-files relies on global options. If I add a c++ file after the import, this file doesn’t get its own section of options. It has to rely on the global options, which are for gnu99 c and not gnu++98.

Long story short. Turn RTTI generation off (-fno-rtti) in global settings, and your project will compile. 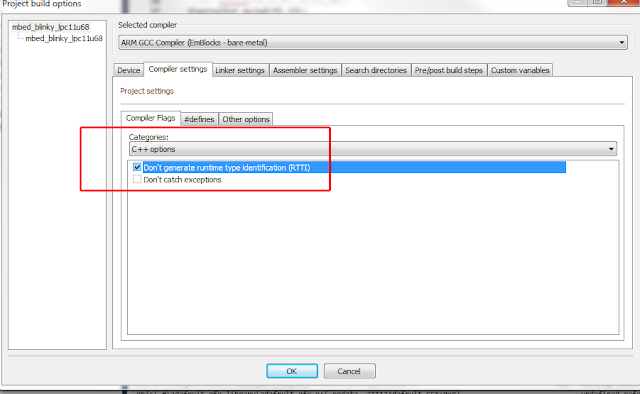 Posted by jonnection at 09:56 No comments:

This is a very interesting device. Low-power Cortex-M0 but with plenty of program and RAM memory. Unfortunately, I didn't instantly find a dev board that I liked, so I built my own.

Its running but ... external oscillator PLL lock fails. Maybe its just that the oscillator is poorly placed (long legs etc).

On internal RC runs 100% like it should (yes, MBED blinky example works, led is blinking in pin PIO1_13). Unfortunately, that means that USBPLL can't be used (the accuracy of the IRC is not enough = USBPLL lock fails).

Any advice on debugging PLL lock problems and external oscillator considerations are welcome. 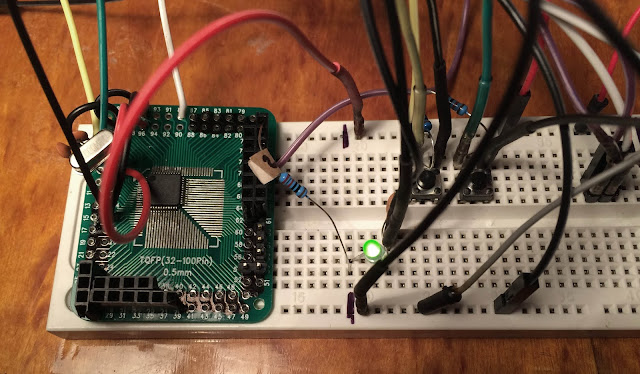 Posted by jonnection at 00:43 No comments: 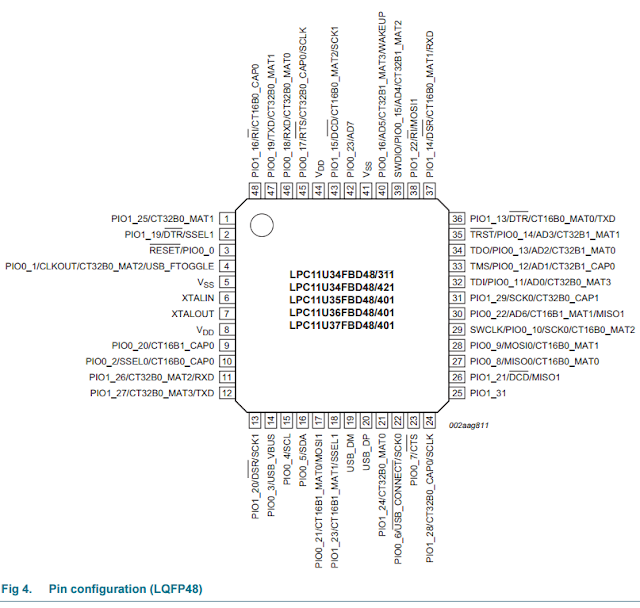 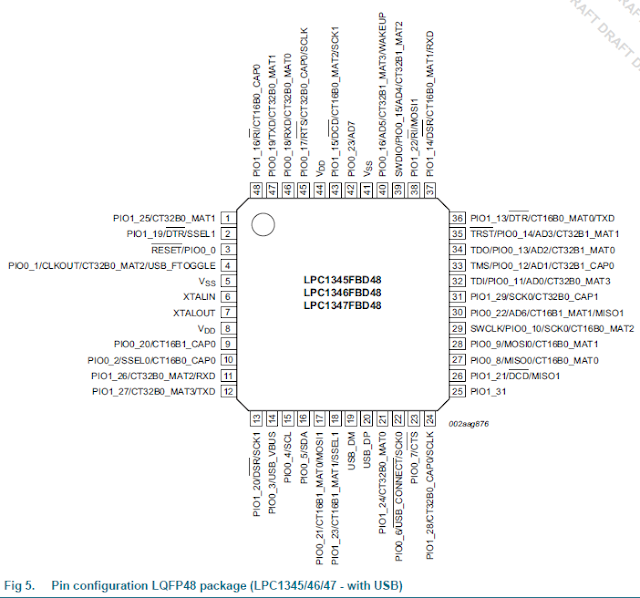 Posted by jonnection at 13:26 No comments:

Just a little heads up for anyone starting to work with LPC1347.

Although you could *think* by the naming that LPC1347 is similar to LPC1343, looking at LPC1343 code samples is going to be a waste of your time.

Microbuilder.eu sums it up in this sentence:


The new GPIO block (of LPC1347) is the same one used in the similar ARM Cortex M0-based LPC11U24, which makes it easy to optimize for cost later and switch between the two devices, but it’s also unfortunately a breaking change compared to the 1343. All pins are now based on two GPIO block – PIO0[0..31] and PIO1[0..31] – rather than the previous four GPIO blocks on the LPC1343. This is potentially the biggest change from a SW migration point of view.

Why does this matter ?

For further study of how LPC1343 and LPC1347 differ, take a look at the CMSIS header files:

Posted by jonnection at 14:02 No comments:

Why your binary will not run on LPC1347 - the missing checksum

So, you've compiled your code and now you have a binary. You've dropped that binary into your LPC1347 / EzSBC2 board, and it won't run. In fact, you get the Mass Storage Controller bootloader popping up.

This is because the bootloader that runs from ROM checks to see if a valid user program is present in flash.

21.7 Criterion for Valid User Code
The reserved ARM Cortex-M3 exception vector location 7 (offset 0x0000 001C in the vector table) should contain the 2’s complement of the check-sum of table entries 0 through 6. This causes the checksum of the first 8 table entries to be 0. The bootloader code checksums the first 8 locations in sector 0 of the flash. If the result is 0, then execution control is transferred to the user code

If the aforementioned checksum is not valid, your code won't run. When you compile in EmBlocks, it does not put in that checksum.

An easy fix to the problem is a command line tool called LPCRC that will calculate and correct the checksum in your binary. I found it in the tools/ section of the Microbuilder LPC11U/LPC13U Code Base, which is an excellent resource for programming your LPC1347.
Posted by jonnection at 15:43 No comments: